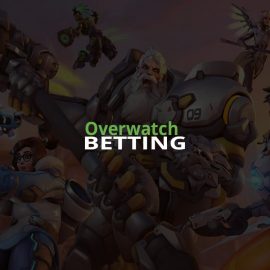 Overwatch is Blizzard’s top competitive esport title. A blend of two genres, Overwatch draws on motivation from both the MOBA and FPS genres.

Discover the best odds and biggest pay-outs for Overwatch.

Pixel.Bet
4.8 rating
Get up to:
$500 Deposit Bonus
Reward available immediately after making your first deposit. Bonus must be wager 35x before it will be transferred to the player's balance. Wagering requirements must be met within 30 days.T&Cs apply
Read Review
T&Cs Apply
New customers only

Offer valid for customers residing in Sweden, Norway, Finland, Canada, Germany, Austria, Malta, Iceland, Ireland, Luxembourg and Lichtenstein. Reward available immediately after making your first deposit. Bonus must be wager 35x before it will be transferred to the player's balance. Wagering requirements must be met within 30 days of offer being credited.T&Cs apply

Overwatch is a First Person Shooter (FPS) game created by Blizzard Entertainment which is played competitively on PC and has had a strong esports scene since its release in 2016. Despite being one of the newer esports titles, Overwatch has a strong following and a well structured competitive circuit known as the Overwatch League.

Betting on Overwatch is much like betting on traditional sports. Many websites offer a variety of markets for the game, varying from classic things like picking which team will win, to esports specific wagers like amount of objectives completed or in-game kills.

Let’s take a look at the basics of Overwatch as well as key things to know about betting on the game.

How Overwatch is Played

Overwatch is a competitive FPS where two teams of six compete to complete certain objectives on different maps. The game features over 30 different playable characters, known as heroes, with each player controlling one hero. Each hero comes with different weapons, abilities, and strengths and weaknesses.

The competitive game is played with teams first picking which maps they want to play and which ones they want to ban. In total, up to five maps can be played in the game’s main competitive league, the Overwatch League, with the first team to win on five maps winning a series.

To win a map, a team must complete the set objective, which differs from map to map. Competitive games can see up to four different game modes, these are:

In Assault maps, teams take turns attacking and defending. The attackers must capture two specific points on the map within a time limit, while defenders try to stop them. Then, when the time runs out or both points are captured, the teams swap sides. In order to win the map, a team must complete the objectives faster than their opponent.

On Escort maps, teams are once again split into attack and defense. This time the attackers must push a moving vehicle, known as the payload, to a certain location while the defenders attempt to stop them within the time limit.

The key difference between Assault and Escort is that the attacking team must remain next to the payload as it moves toward certain locations on the map, rather than capturing a specific point. This means the map plays out quite differently and you’ll often see different strategies employed.

Hybrid is, as expected, a mix of the above modes. As usual, teams are split into attack and defence and must complete the objectives before time runs out.

The key difference here is that the first half of the map is like Assault, where the attackers need to attack a point. Then, if successful, they’ll need to escort the payload to a certain point on the map.

Control is different from the others, it’s a ‘king of the hill’ mode where the two teams battle it out to control a point on the map. There are no attackers or defenders, and there’s just one point to fight over.

Teams build control over the point if their players are the only ones on the point, aiming to reach 100 percent. A round ends when a team reaches full control of the point and to win the map a team needs to win two rounds.

Overall, betting on Overwatch isn’t too different from placing wagers on traditional sports. You can find a variety of Overwatch bets on many of the biggest betting websites, as well as dedicated esports betting sites.

You’ll find many traditional markets like moneylines and spreads, as well as some unique Overwatch options. These include game-specific bets like correct map scores or number of takedowns. Here are some examples of the most popular Overwatch markets:

How to Find the Best Overwatch Betting Sites

When it comes to betting on Overwatch, the best way to do it is through an online betting website. There are a ton of options, so it’s vital to pick the best one for you, and here’s how.

The main thing to consider when picking a betting website to use is what you want out of betting. Do you want to just have some fun? Then an easy to use site with a clear layout is best. Are you a dedicated bettor? If so, something with a variety of markets would be ideal to stretch your wings.

It can be difficult to consider this while browsing through an almost endless wave of websites. Luckily, we’ve made things easy with a list of the best Overwatch and esports gambling sites, so all you have to do is have a quick scroll and find your ideal website.

Betting on Overwatch can be difficult, every match is unique and with over 30 characters and multiple maps there’s always a ton to consider. Here are a few tips to make things a bit easier:

Overwatch features a strict competitive circuit and the majority of top-end competition is split into two events: the Overwatch League and the Overwatch World Cup.

The Overwatch League is the premier competition, where the best of the best compete in weekly matches spanning across around five months. Meanwhile, the Overwatch World Cup is an annual tournament where players represent their countries rather than league teams.

Min deposit £5. Bet Credits available for use upon settlement of bets to value of qualifying deposit. Min odds, bet and payment method exclusions apply. Returns exclude Bet Credits stake. Time limits and T&Cs apply.
£40 Sports Welcome Bonus at STS!
EBZ
Bonus Code
The Sports Welcome Bonus is offered to new depositing customers only and is based on your first bet amount. Receive up to £40 as a sports bonus once you follow the simple steps below
Get Bonus
T&Cs Apply
New customers only

Copyright EsportsBetZone 2021 (TAG Media Limited)
We use cookies and similar technologies to ensure our website works properly, personalize your browsing experience, and analyze how you use our website. For these reasons, we may share your site usage data with our analytics partners. You can choose whether or not you want to consent to our use of cookies through the options below. By clicking “Accept”, you consent to the use of ALL the cookies.
Cookie settingsACCEPT
Manage consent

This website uses cookies to improve your experience while you navigate through the website. Out of these, the cookies that are categorized as necessary are stored on your browser as they are essential for the working of basic functionalities of the website. We also use third-party cookies that help us analyze and understand how you use this website. These cookies will be stored in your browser only with your consent. You also have the option to opt-out of these cookies. But opting out of some of these cookies may affect your browsing experience.
Necessary Always Enabled
Necessary cookies are absolutely essential for the website to function properly. This category only includes cookies that ensures basic functionalities and security features of the website. These cookies do not store any personal information.
Non-necessary
Any cookies that may not be particularly necessary for the website to function and is used specifically to collect user personal data via analytics, ads, other embedded contents are termed as non-necessary cookies. It is mandatory to procure user consent prior to running these cookies on your website.
SAVE & ACCEPT